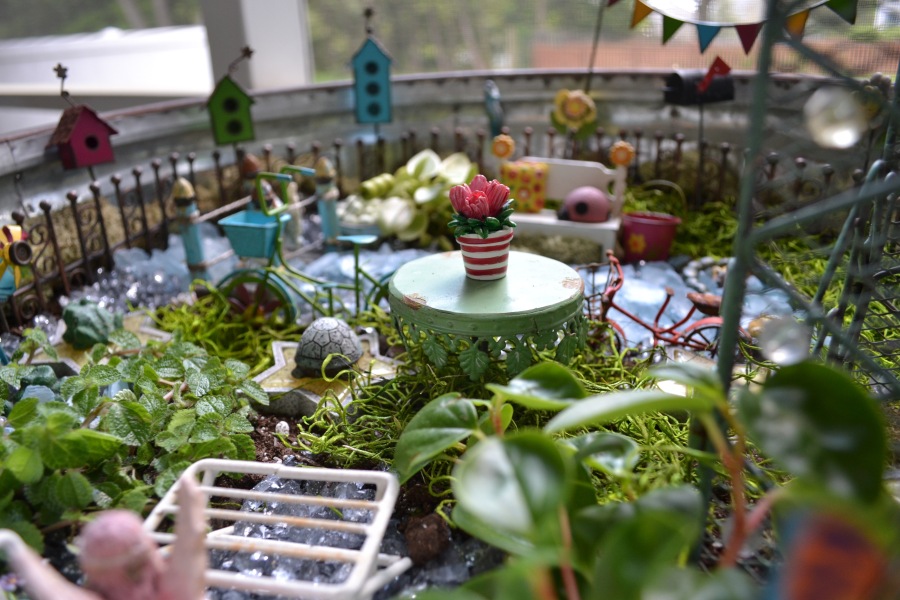 For my daughter and me, springtime means it’s time to dust off our fairies and get ready to build this year’s fairy garden. In an effort to try something new, and inspired by a container fairy garden I saw displayed at Homestead Gardens, I decided to surprise my daughter with a pretty container and some new accessories to build part of our fairy garden. We actually have so much stuff, we decided to split up our fairies into the “little container fairy garden” that will be displayed on our back porch, and the one in the front garden as you enter the house.

It was a lot of fun sharing this time together, being creative, and hunting for the items we wanted to add to this year’s garden. If you haven’t built a fairy garden with your daughter, I highly suggest it. When we reminisced on how we got started with this annual project, it all started with a Hallmark Christmas movie we watched called “Christmas With Holly,” about a little girl who loses her mother and has to live with her three uncles. Along the way, Holly meets a toy store owner who happens to have a beautiful fairy house, and she believes her mother may be a fairy watching over her from that toy house. That was it. My daughter and I were so enamored with the story that we decided to create our very own fairy garden.

If you’re wondering if fairy gardens do, indeed, have magical powers, I happen to believe they do.

Fairies are invisible and inaudible like angels. But their magic sparkles in nature. —Lynn Holland 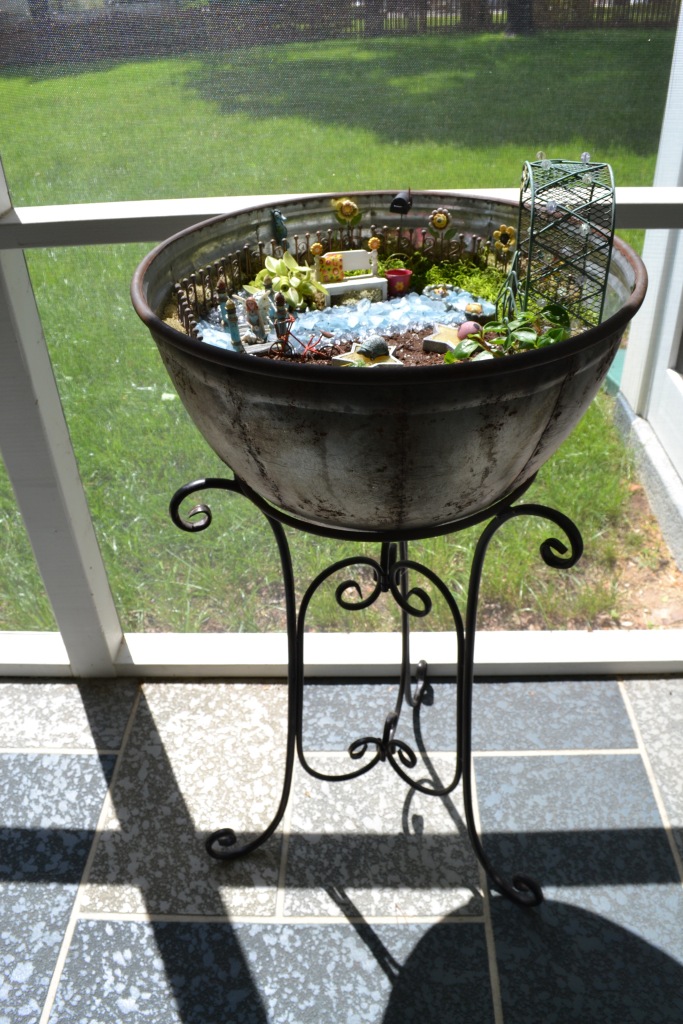 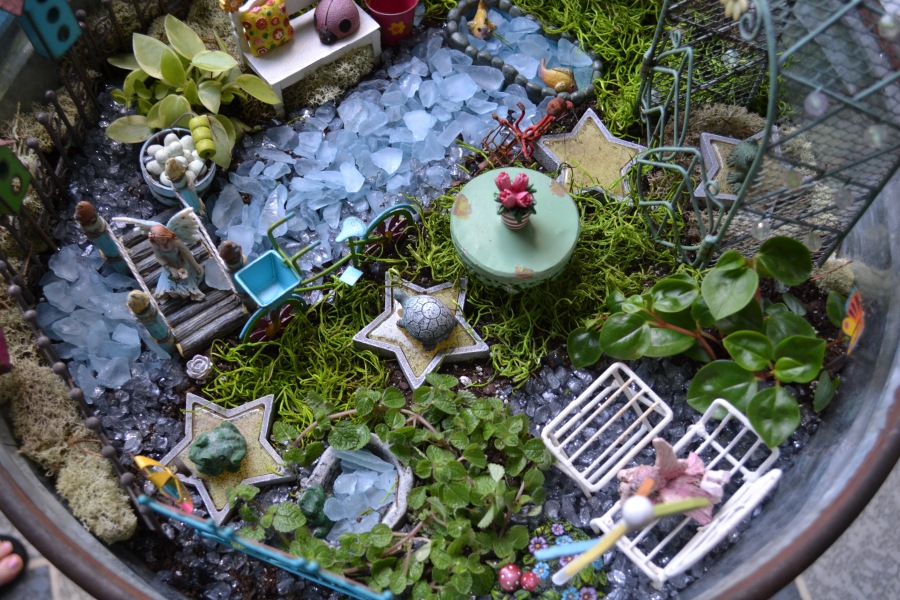 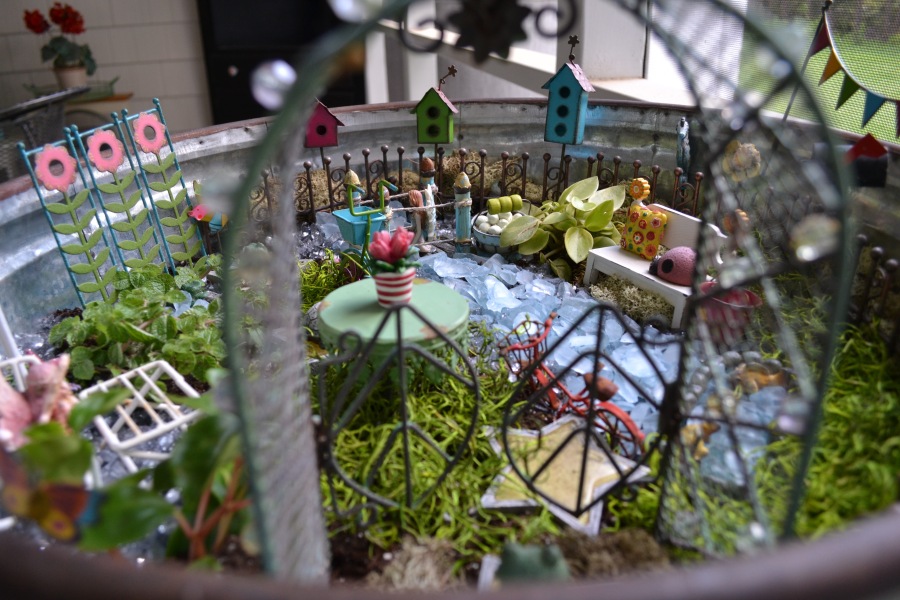 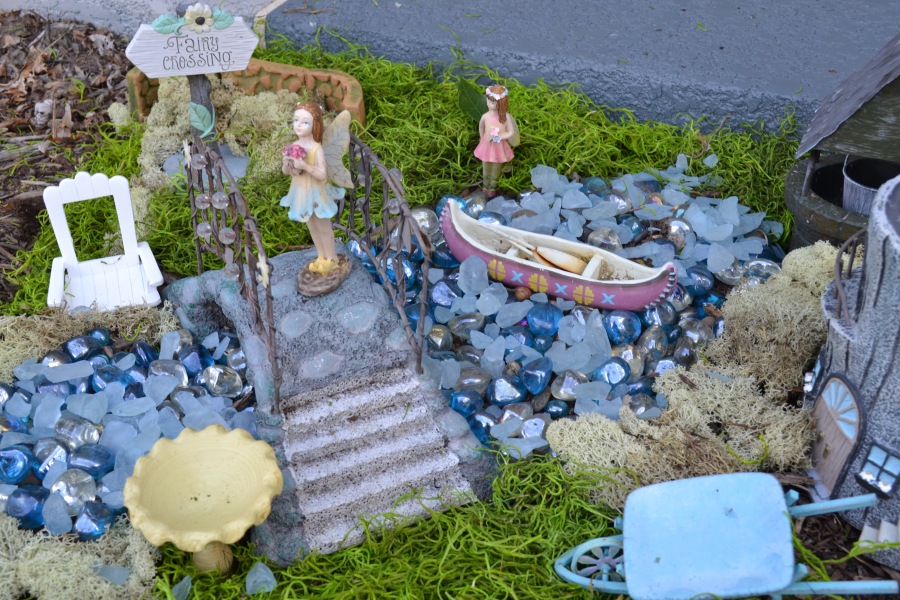 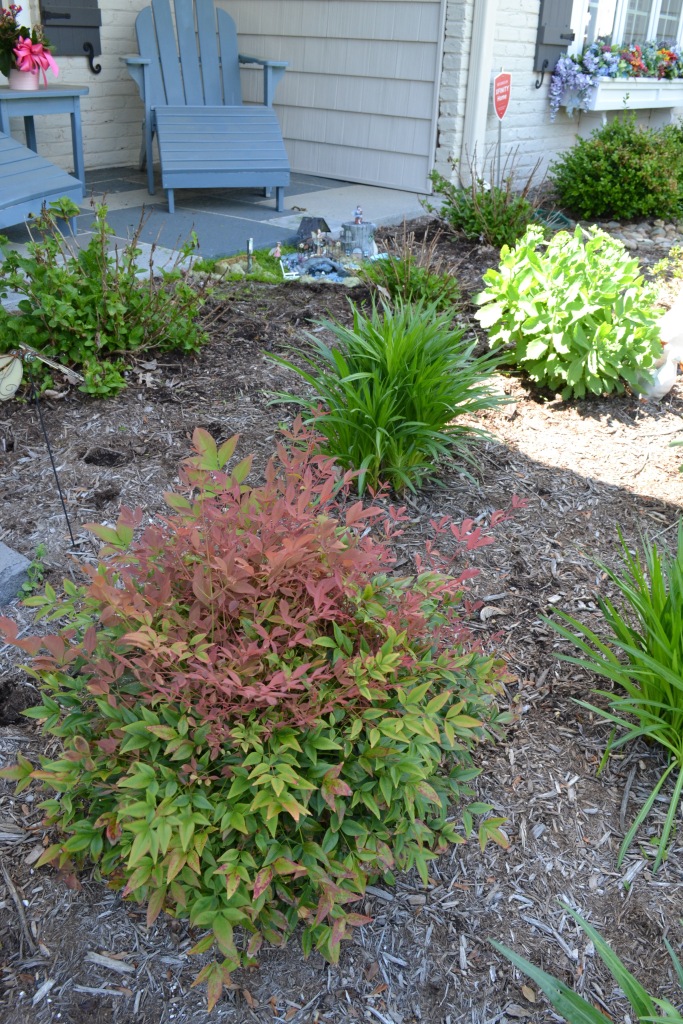 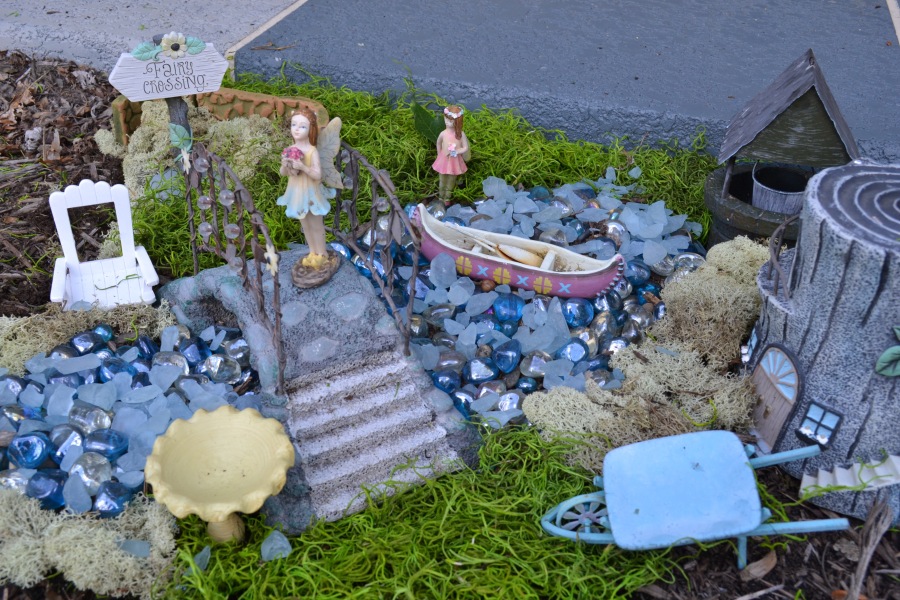 One thought on “Our Fairy Gardens: One in a Container, One in the Garden” 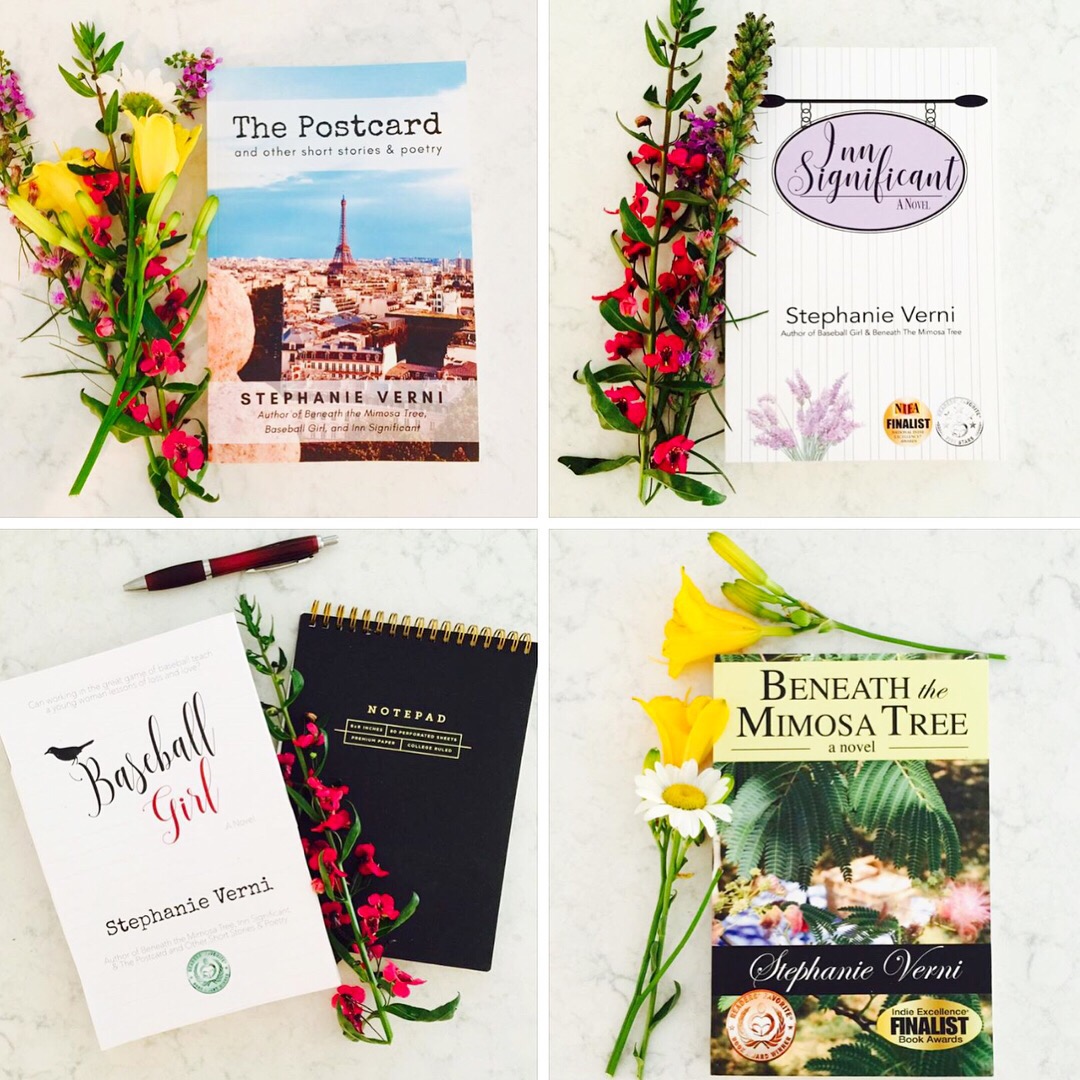 Our house is a mix of cottage style infused with a little touch of French influence. I love chandeliers and light colors, and I’m fortunate that my husband is okay with all of it. We have lots of painted pieces—many that I’ve done myself—and I love when people feel comfortable enough to put their feet up and make themselves comfortable in our home or out on the back porch. We have only one dining area inside, and from spring through fall, we eat most of our meals outside on the porch. It’s like an extra room for us in the good weather. . . I tend to think of my writing in the same way that I think about decorating a home: I want it to be a comfortable, nice place for readers to visit to get away from the things that bring them down. Light, comfortable, and good company are key ingredients in my storytelling. There’s no need to feel depressed when you pick up one of my novels. . I also can’t wait until spring arrives. January through April can often feel endless. It’s a good thing there are lots of events and campus activities to keep us busy until then. Oh...and books. There are always...books.🥰 . #professor #writing #writers #teacher #books #inspiration #writingcommunity #amwriting #amreading #authors #cottage #cottagestyle #frenchstyle #writerloop #readers #booklover #followloop #amediting #bookstagrammer #innovation #blogging #blogger #2020booklovers #creativity #stephsscribe #author #blogger
Today is what life is all about, people: LOVE. ❤️ And it's not always romantic love—just love in general. I've spent years writing books with love as a core theme. Love for a father, a mother, a grandmother, a grandfather; love for a daughter or son; love for one's work; love for dear friends; love for life; and letting go of one love to begin another. . We've all been there. We've experienced euphoric relationships and devastating ones. We've felt the waves of a new love and the crushing sensation of a broken love. . People often ask me how much of "me" goes into the writing of my books. I'm sure it's not surprising to hear an author say that a lot of herself is in the writing. It may not be the exact same situation or characters, but the feelings or imagined feelings of the story are easy to write when you've experienced something similar. Frighteningly similar. . On this Valentine's Day—February 14, 2020—remember your loved ones. The ones who lift you up. The ones who give you hugs and kisses. The ones who tell that you can do it, even when it seems like an uphill battle. Valentine's Day is all about LOVE. ALL those we LOVE. ❤️💜🧡💛💚💙🤍🤎🖤 . . . . . . #authorsofinstagram #creativity #fiction #blogging #blog #writingislife #stephsscribe #bookstagram #writers #books #storytelling #writingcommunity #amwriting #coffee #authors #authorloop #valentinesday #readers #booklover #authors #awritechristmas #bookstagram #vicidolls #smalltownromance #romance #lovestories
Throwback Thursday to vacation in Palm Beach, long hair, time together, an anniversary getaway, books on the beach, and exploring someplace new. 2020 is looking promising thus far...crossing fingers for more good things to come. 🤞🏼 . . . . . #fashion #style #personalstyle #ootd #whatiwore #travel #fashionblogger #travelewriting #oalmbeacj #teacherstyle #ootdstyle #ootd #professorstyle #professorstyle #thebreakers #writer #booklaunch #author #professorlife #books #lifestyle #blog #blogger #tbt #professor #stephsscribe #personalstyle
Okay...who else can’t live without these two books? I pride myself on my copy of The Elements of Style—it’s from my college days and features spilled coffee on the pages!! And William Zinsser’s book—just 🥰🥰🥰! Also, made it through the day with sinus issues and a fever. 💪🏻Time for snuggle clothes.🍯 . . . #communication #writingbooks #writingprofessor #reference #onwritingwell #businesscommunication #stephsscribe #author #writer #amwriting #books #strunkandwhite #blog #blogger #willianzinsser #bookstagram #reading #teachers #writing #blogger #eventplanning # #elementsofstyle #colleagues #writersinspiration #creativity #professors #communication
I believe in the power of... ✔️ Grandmothers ✔️ Family interventions ✔️ Starting over ✔️ Forgiving yourself ✔️ Being open to new possibilities ✔️ A little romance And... ✔️ Letting go The characters in my book face these challenges and more as they realize, perhaps, that life is made up of many LITTLE MILESTONES. The perfect Valentine’s Day read. Let me know what you think of the story and the town of St. Michaels. 💙 . . . #professor #writing #writers #teacher #books #inspiration #writingcommunity #amwriting #amreading #authors #authorloop #writerloop #readers #booklover #amediting #bookstagrammer #innovation #blogging #blogger #author #2020booklovers #creativity #stephsscribe #storyteller #blogger #womensfiction #romance
I am a LOO—Lover Of Overalls. 😉 Ever since parting with a pair I had years ago, I’ve been in search of the right substitution. If you are curvy and love them like I do, you’ll like the fit of these by @targetstyle. Good fit + good price. Have a great Sunday, friends! #inlove . . . . #fashion #style #personalstyle #ootd #whatiwore #targetsyle #fashionblogger #overalls #whatiworetoday #teacheroutfits #teacherstyle #ootdstyle #ootd #professorstyle #professorstyle #author #writer #casualstyle #professorlife #books #lifestyle #blog #blogger #professor #stephsscribe #personalstyle #bookstagram #ootdfashion
I haven’t posted any travel photos in a while because circumstances have kept us from traveling. So, I’m combing through my travel photos and came upon these. I would count this resort as one of the very best anywhere. Itching to get back here soon. It’s a place to go to be utterly pampered, and to enjoy being pampered, as we were for an anniversary trip. Top-notch and gorgeous. @thebreakers . . . . #authorssupportingauthors #follow #writers #bookworm #authorloop #writingbooks #travelwriters #travel #traveling #teaching #travelers #thebreakers #florida #beaches #resorts #beach #anniversarytrip #memories #writers#palmbeachflorida #writingcommunity #goplaces #writersconnect #travel #travelgram #latergram #blog #travelblog #travelogue
CELEBRATING TONIGHT! So incredibly happy for my husband who will be joining the Orioles as VP Corporate Partnerships. We couldn’t be prouder of him! It’s wonderful for him to be returning to a place that is nostalgic and like home for us—we met working in the front office there and wouldn’t have our two beautiful children and amazing friends if it weren’t for the Baltimore Orioles. Wishing him all the best in the job and looking forward to going to lots of games this season! 🎉🎉🎉⚾️⚾️⚾️ Let’s go, O’s! . . . #orioles #congratulations #baltimore #baseball #love #sports #communication #camdenyards #careers #baseballteam #mlb #orangeandblack #friends #friendship #romance #baseballandromance

All rights reserved. Articles may be used with permission.